Hey everyone, we were discharged and arrived home earlier today. Judah is doing well and getting back to himself! We’re all exhausted but doing well.

As I said earlier today, everything went really well. Judah has been recovering all day and we’re beginning to see him be more of himself. He is still pretty crabby but that’s normal with coming out of anesthesia. The doctors fully expect us to be home with Judah tomorrow.

Bronchoscopy
They were very happy with what they saw in his lungs. They said it look 100% better! This is is an answer to prayer! Right now, we have no plans to change anything in terms of treatment. More details on the next step with the trach and vent later in this post.

Heart Catheterization
Everything went really well with the heart cath. As I said, they had really easy access getting from his upper leg, through his abdomen and chest and into his heart. Because he’s had so much done in that area, they expected some trouble getting to the heart. As far as his heart looks, it’s as good as it can be, given his condition (HLHS). The blood moves well, the pumping action is strong, there isn’t any narrowing of any veins, and all the valves look good.

If some of you sensed a “but” coming, here it is: they noticed that his left lung is a bit abnormal. It’s actually fairly difficult to explain and there isn’t a name for it that we’re aware of. Basically, his left lung isn’t functioning properly. That could be because he was born that way or because of trauma that the lung has experienced so far. (Surgeries, diaphragm plication, drainage tubes, etc.) The main problem is that the blood going into his left lung is “back washing,” and so the lung isn’t being adequately oxygenated. In most people’s lungs, the blood volume in your lungs is about 55% to the right lung, and 45% to the left. With Judah, it could be as high as 85% to the right, and only 15% to the left. They believe that this will correct itself after his next surgery, the “Glenn”. We aren’t too worried about explaining all the details of this issue just yet, as we will probably revisit and learn more as we approach Judah’s next surgery. Speaking of which, let’s move on to that.

Judah will have his next heart surgery sometime in October. We don’t know exactly when yet. Our cardiologist will take the results from today’s tests to a weekly phone conference with other heart experts from Buffalo and Syracuse on Thursday. After that, they will call us with possible dates. Even though his heart looks good, it really only means that it looks good for his condition, he still needs the next surgery. Because there is a high risk of the flu in the winter months, they want to do it before it gets too cold outside. Even though his lungs look good, they want to wait until after he fully recovers from the surgery to discuss taking the trach out. However, that will be in the winter months and the middle of flu season, so we’ll most likely have to wait until the spring.

Thank you all for praying for us and Judah. Please continue to pray that Judah has a good night’s sleep and is ready for discharge tomorrow.

Hey everyone, Judah did great! They finished early because his veins were easier to access than expected.

Overall everything went really well. His lungs look great and his heart is about what they had hoped for at this stage. More details tonight. 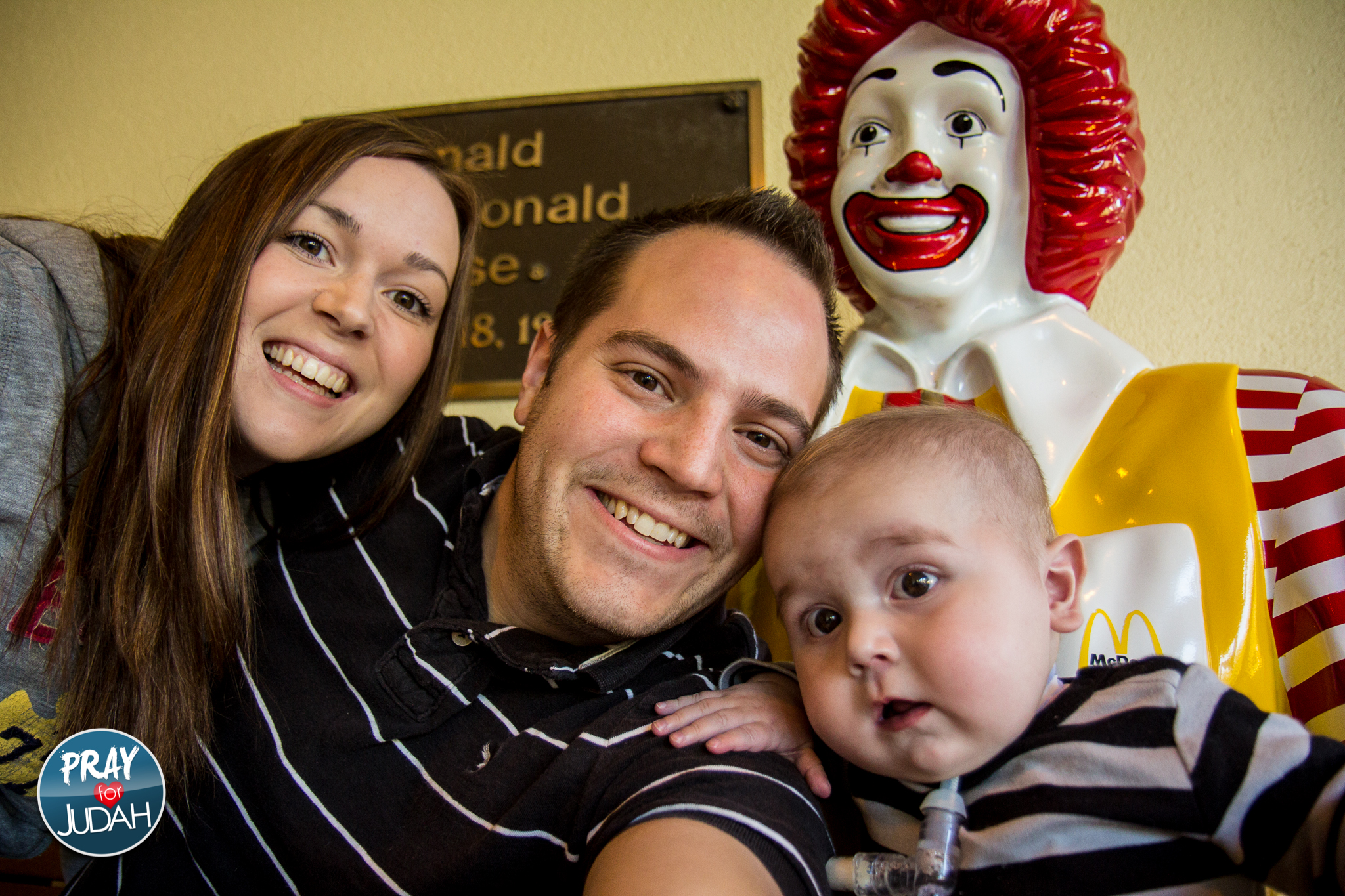 Tonight we arrived back at the Ronald McDonald House near Strong Hospital in Rochester, NY. Early tomorrow morning Judah will be going in for some testing. He will be having heart catheterization and a bronchoscopy done back to back. We will take him in at 6:30am and they’ll start around 7. He will be put under anesthesia and they will start with the bronchoscopy. That should take around 30-45 minutes. They will be looking to see how much his airways have grown since early January. (For more details on the first bronchoscopy, read this post.) So as soon as that’s done, the pulmonologist will come out and give us results. The cardiac team will then immediately start with the heart catheterization. They will be checking to see how his heart is doing and how soon he needs the next surgery (the Glenn). That will take a bit longer, about 60-90 minutes. As soon as that’s done we will talk with our cardiologist about what he saw and what he thinks about the next surgery. As we’re talking with the doctor, Judah will head to the recovery room where we’ll join him soon after. Early in the afternoon we will take Judah up to the PICU (where we were for 5 months earlier this year) and Judah will stay overnight just to recover fully before we take him home on Wednesday. (Hint hint, nurses who may not be working tomorrow but want to stop by for a visit, we’d love to see you.)

This is a scheduled procedure so it’s nothing urgent. Judah has been doing very well at home. He’s off the vent for 2 hours and 20 minutes, twice a day. He shows no signs of getting tired at the end of each “sprint” and his numbers are always good.

Liz and I are doing well. Even though we’re here for something very minor, being back in this environment stirs up some memories and emotions. I’m sure tomorrow will bring on even more. “Surgery Day” (as we’ve come to call days like this) is never easy. Watching your baby be rolled away under someone else’s care is something that’s difficult to deal with. We have always trusted God and we will continue to do so.

Prayer Requests
1. That there would be no complications or problems with anything tomorrow.
2. That Judah’s airways would be at 100% and we will begin looking at taking the trach out.
3. That the doctors will find that a miracle has taken place in Judah’s heart. We know that sounds crazy to some of you reading this, but we really believe that our God can do miracles.
4. That his recovery would be quick and without any issues.
5. That Liz and I would feel God’s peace while he’s gone tomorrow.

Thank you all so much for your constant prayer and support! This past year has been so crazy for us but we are so thankful for God’s grace and your support.

I’ll be updating as I’m able tomorrow. You can subscribe to the blog if you’d like to receive updates in your email.