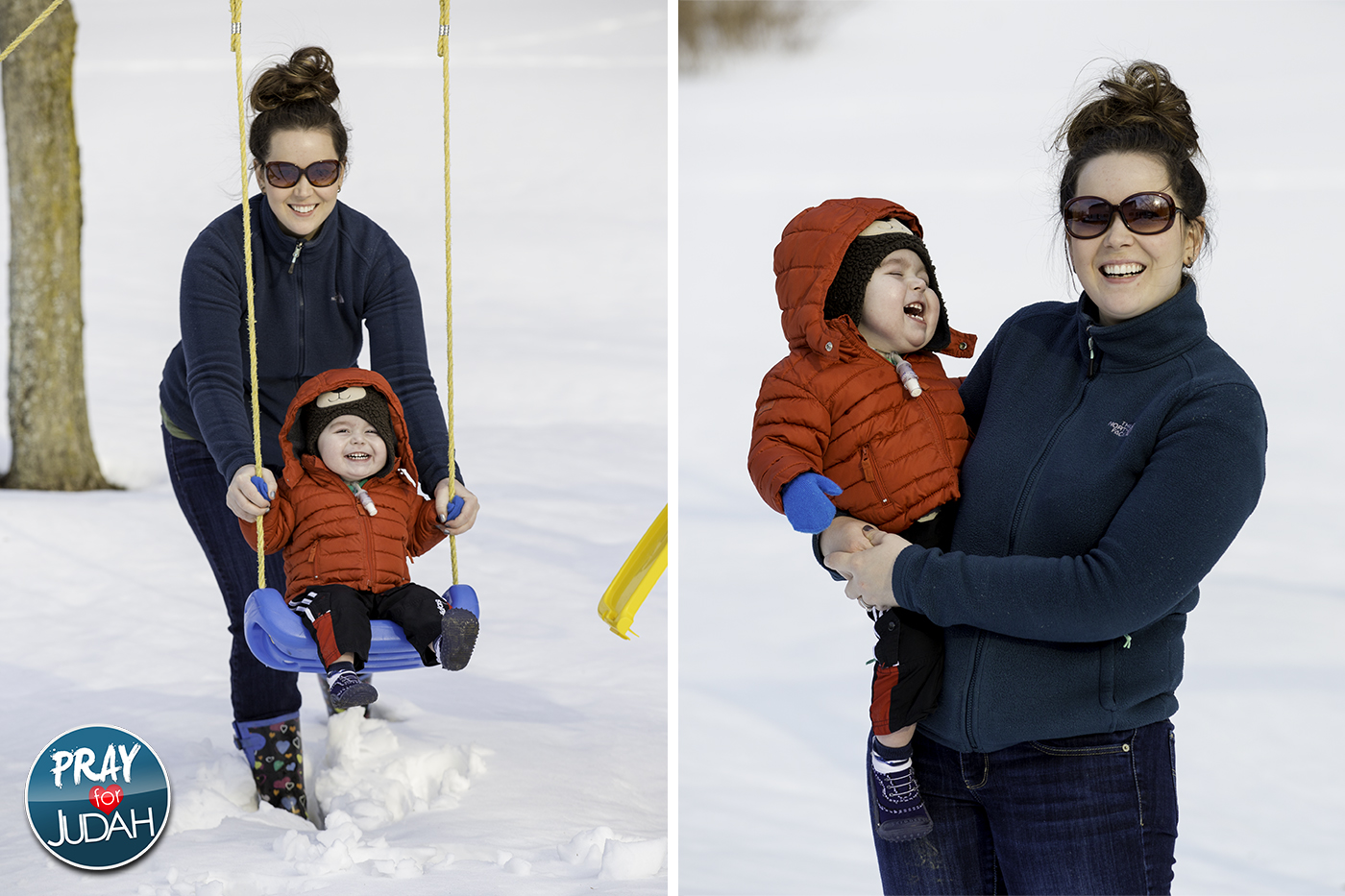 We’re very happy to annouce that Judah no longer needs a ventilator to help him breathe!

Brief History
Since the day after Judah was born, he has needed to be on a ventilator. At first it was just to get him through surgery. But, after a few months and several attempts to let him breathe on his own, it was decided that he would need a tracheostomy tube and a vent 24 hours a day. We were told it would take anywhere from 9 months to 3 years for his lungs and airways to mature enough so that he wouldn’t need it. That changed everything for us. We would now need to learn how to care for him with a trach and have nurses caring for him in our house at least 10 hours a day. Of course, we were up for the challenge and were eventually able to bring him home.

Since late summer, Judah has been able to take more and more time off the vent. It started with just 10 minutes off per day, and by yesterday, he was up to only 4 hours ON the vent, every other day.

The News
When we took him to his pulmonary appointment yesterday, Liz was able to carry him into the hospital on her hip and carry just a diaper bag and suction machine. This was AMAZING for us! We used to have to bring a large stroller, a heavy vent with hard-to-manage circuit tubing hanging off, a suction machine and diaper bag.

They took some blood for a veinous blood gas lab. The results were excellent! After that, the decision was made that he no longer needs to use the vent – at all! This is the news we’ve been waiting for since last January. It feels great to finally be here.

Since he no longer needs the vent, we have a bronchoscopy scheduled for April 7th. During this procedure, they will examine his airways to make sure everything looks good. If everything goes well, they will remove the trach (decannulation) right then, cover the stoma (hole where the trach was) and let it close naturally. (When the stoma is allowed to close naturally, it can take anywhere from a couple weeks to several months.) After a couple days for observation in the hospital, we’ll be able to go home with no trach!

Possible Complication
Back in October of last year, Judah had his second open heart surgery. During the prep for the procedure, they took out his trach and tried to put a breathing tube through his mouth and into his lungs. As they were attempting to put the tube in, they had some trouble getting it past his upper airways. They were able to put the breathing tube through his trach stoma (hole) instead. The concern is that there is scar tissue in his upper airways from the few months he had the breathing tube down his throat. This wouldn’t have been noticed before because whenever they did a broncoscopy, they either put the camera through the breathing tube or through the trach, so they only looked at his lower airways. If that turns out to be the case, they would have to surgically remove the scar tissue and it would extend our hospital stay from a couple days to about a week. It’s also possible that the difficulty they had intubating him was a fluke and that there’s nothing wrong. This is what our pulmonologist believes and what we hope for. We didn’t say anything at the time because there was so much going on with the surgery, and we felt it would have been an information overload for our readers.

As we celebrate this milestone, we also remember the Sauers and young Ben. We were able to go to the Blue4Ben benefit on Sunday that we had mentioned in our last blog post. It was unbelievable how many people were there! Western New York has really taken Ben to heart and it’s been amazing to see how far his story has reached and the lives it has touched. The Sauers are truly an incredible family. The way they have stood in the midst of this heart wrenching time is a testament to their relationship with God. Please continue to pray for a miracle for Ben. It’s his only chance and God is able! You can read their blog here: blue4ben.com.

Thank you for standing with us all these months! It means so much to us! 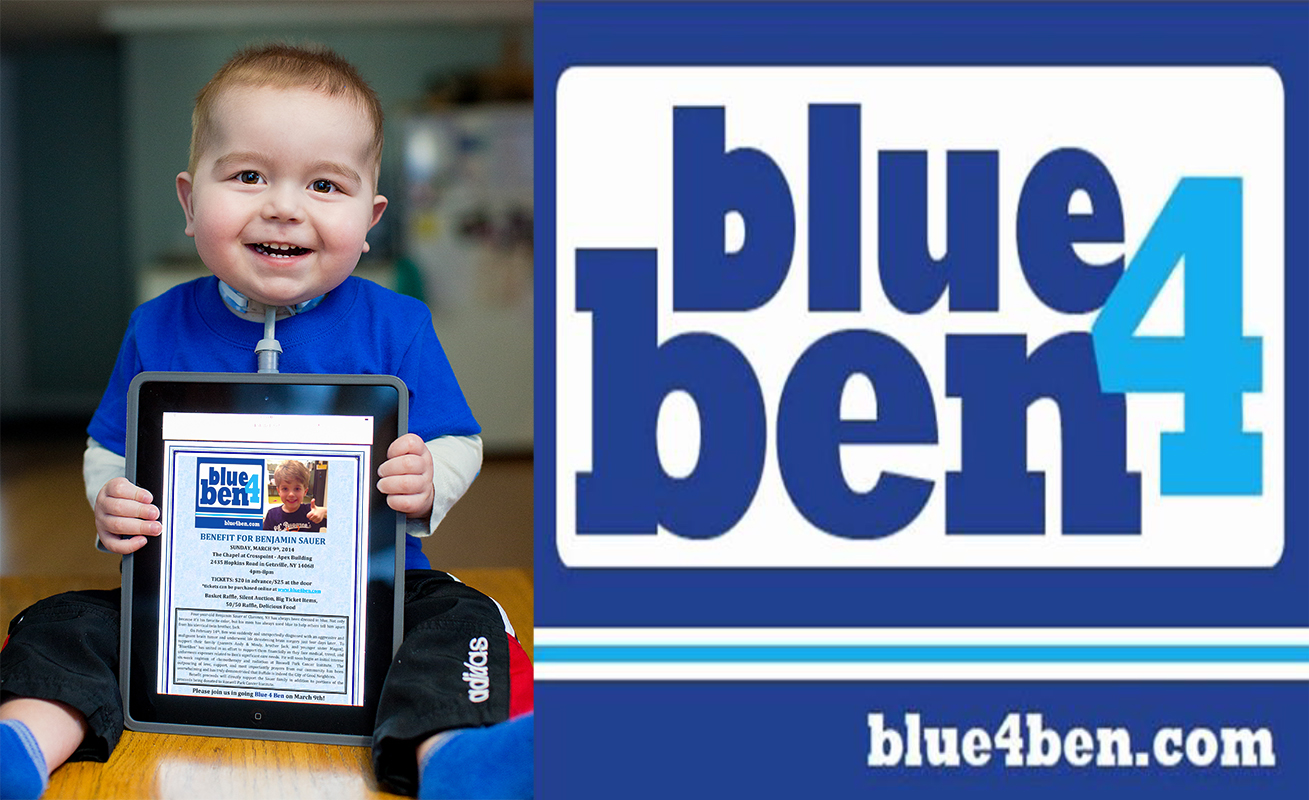 Hey everyone, we know it’s been a long time since we posted on our blog. Part of the problem was that we were having some issues with our website. All of that has been cleared up and we’re happy to be back.

I’m just going to give a very brief update on Judah because we really want this post to focus on someone else. Judah has been doing incredibly well! A few weeks ago we got the green light from his pulmonologist to begin aggressively taking steps back from the ventilator. Right now, he is only using the ventilator for 4 hours, every other night. Which means, he’s off the vent completely for 44 consecutive hours at a time. Next week we will have another appointment and at that point most likely have the vent taken away forever! Our hope is still that he will be able to have the trach taken out sometime in April.

The main thing we want to talk to you about today is a little boy named Ben. This story has been circulating Facebook and has found it’s way to so many different circles. It’s really amazing. I even saw a story about him on the news this morning. Ben is an adorable 4 year old, has an identical twin brother named Jack, and a 2 year old sister named Megan. Ben has also been diagnosed with a very aggressive form of brain cancer, Stage IV Glioblastoma. Just in the last 6 weeks or so, he has undergone brain surgery, countless tests, chemotherapy and radiation treatment. All of that has been unsuccessful in slowing the growth of his brain tumor. In fact, it has tripled in size in just a week. The doctors have said that they have never seen anything like this.  At this point there is nothing more the doctors can do to help. Mostly likely, Ben only has weeks left. We encourage you to read the whole story on a blog that Ben’s mom Mindy has started here: Blue4Ben.com.

First, we ask you to pray for a miracle for Ben. It is the only chance he has left. So many of you have spent time praying for us and for Judah and we ask you to now turn those prayers towards Ben and his family. We believe our God is able to do miracles. Please stand with the Sauer family during this incredibly difficult time.

Second, we want to let you know about a benefit event for Ben this Sunday March 9th at 500 CrossPoint Pkwy, Getzville, NY 14068, 4pm-8pm. You can see all of the details at Blue4Ben.com. Many of you gave to us financially while we were in the hospital with Judah. Not having to worry about money was such a blessing to us. It allowed us to focus on Judah and on each other. We would love to see the same happen for the Sauers.

Third, please share Ben’s story and information about the benefit. You can share our blog but it would be better to share it from Ben’s blog.

Thank you for you prayer and support for us! Please visit Ben’s website here: Blue4Ben.com