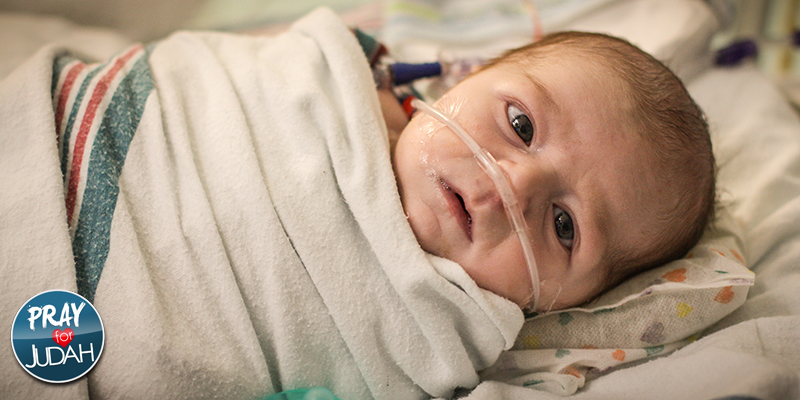 Today was a great day! I went down this morning to catch the doctors “rounds,” (eavesdropping on all the doctors as they brief each other can be a great source of information) and they were happy with Judah’s progress but thought he needed another day before taking his breathing tube out. This was fine with us. Around noon, they said they were thinking about taking the tube out this afternoon because “He’s feisty and I think he wants it out.” So, around 3PM they did just that and he’s been doing very well breathing on his own since then. The doctors are “ecstatic about his progress.” Also, because his tube is out and his chest is closed, Liz and I were able to hold Judah (like a real baby and not on a pillow) for the first time since his first 24 hours. Getting to hold him let us connect with him in a way we haven’t been able to in a long time.

Now that the tube is out we have some new goals. They’ve had him on three different medicines to help his heart adjust to the surgery. They have already begun to wean him off these heart meds. The doctor said that “he probably hasn’t needed those meds for a while now.” The first goal is to get him off of those drugs completely. Once that’s accomplished, he will be able to start “eating”. Since this all began he’s been getting nourishment through IV fluids. This goal is for Judah to breast feed. That can be difficult for a newborn without all of the traumas he has been through so they don’t expect this to be easy. Most likely, they will have to supplement him through a feeding tube that would go into his belly. They will give him a day or two to try breast feeding and then decide about feeding tube. It’s our hope and prayer that he will be able to breast feed and not need a feeding tube. Another concern is that that during the surgery, it’s possible his thoracic duct could have been damaged. (For more details about what that does, click on the link in the last sentence.) If it was damaged, some of the fat that would come into his body through the breast milk could leak out into his chest. This isn’t something that could really hurt him but it would mean he would instead be given formula, which doesn’t have as much fat in it.

To simplify, here are the prayer requests:
– that he would remain breathing on his own with no complications
– that he would be able to breast feed well enough that he doesn’t need a feeding tube
– that his thoracic duct didn’t sustain any damage during surgery

Aside from all that, this is the first time since his first 24 hours that Judah hasn’t had tape all around his mouth, so we’re able to actually see what he looks like! We think he’s pretty cute. Also, because he’s had the breathing tube in, his throat is still a little inflamed so he doesn’t have a voice right now. However, he still can cry pretty good and when his voice comes back we think it’s going to get a lot louder in our little corner of the hospital. We were also told today that the goal is to have us home by Christmas. It most likely won’t be that long, but they don’t want to get our hopes up too high. Our hope is to be home in a few weeks but we know it may be a bit longer. We trust God in this and know He will give us more than what we need until we get home.

We’re so grateful for what God’s done and how He’s kept us during this time. We don’t know what we’d do without Him. He’s our hope, our grace, our safety and our healer. We give Him glory and pray that through Judah’s life, many will come to know Him like we do.